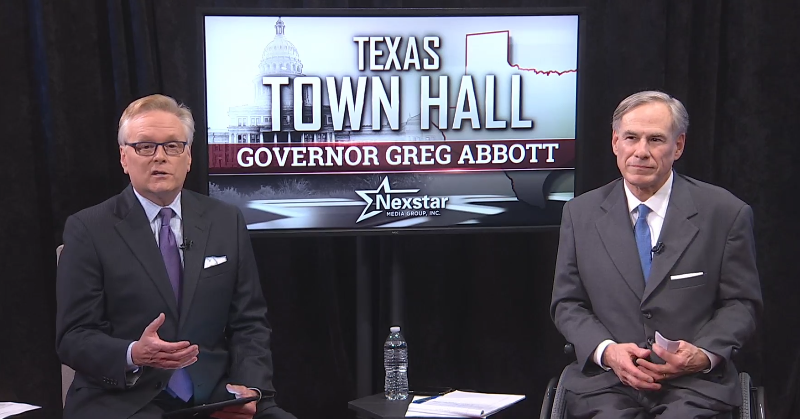 News is moving fast and furious right now, and a lot happens throughout the day. Here are some quick bullet points on what has happened in the past 24 hours.

All participants had their temperatures taken as they arrived at the KXAN studios in Austin, where the one-hour town hall was recorded.

It’s going to be bad, then really bad, before it gets better. The first positive case in Texas was on March 4 – a cruise ship passenger who was hospitalized after arriving at Lackland Air Force base. There have been five deaths in Texas now, and Abbott said that he anticipated there being “thousands of people in Texas who test positive” by next Thursday.

All schools means all schools. Private, public, colleges and universities are all subject to the governor’s order to close. But there are exceptions on the higher education front, and students should look to their schools for guidance.

When schools go back is a moving target. Morath said that the TEA is “looking and waiting on the data as it comes in,” and would be making decisions based on the best science. The governor’s order lasts until April 3, and depending on what happens, schools could reopen, or that order could be extended.

With STAAR gone, students will (probably) still advance. Morath said that STAAR would not be a factor in a student’s being held back or not allowed to graduate – it would be up to individual districts and their graduation requirements. Instruction would still continue – with a mix of low tech (homework packets) and high tech options.

Childcare operators can remain open. In fact, Abbott said that making sure childcare operations stayed open for parents who needed to work was imperative, but that they would be required to abide by “heightened standards,” like limitations on visitors, and better drop-off procedures. Abbott also said that the state was also trying to create additional childcare centers that were close to hospitals and other facilities where essential hospital staff work, so that they can continue to work.

To-go orders are safe. Hellerstedt said that as long as the restaurant is using proper food handling procedures, there shouldn’t be an opportunity for food contamination. “We know that it’s really important for people to have access to restaurant food,” he said, adding that the brief contact at the drive-up window shouldn’t be risky.

The rainy day fund is an option. “We need to be prepared for anything – we don’t know if this is going to last two weeks, or if this is going to last 10 months,” Abbott said. He also said the governor’s office has access to a $150 million emergency fund he can tap into, and didn’t rule out the possibility of convening a special legislative session to access the state’s multi-billion-dollar rainy day fund.

Normal comes faster if we all cooperate. Abbott says how quickly normalcy comes back depends on how long it takes to control the outbreak. “If we do our job, and we’re able to contain this, and bend the curve of the coronavirus, we’ll be able to go back to normal,” he said. Hellerstedt said that not only does this social distancing help contain the spread, it also makes sure that the disease can be managed by hospitals. “The thing we want to avoid is a very sudden steep increase of people who get sick,” he said. “We want to slow that rate of growth down, so that everybody who needs a hospital bed has access to one.”

Dallas ISD will be providing breakfast, lunch, and dinner to students beginning Monday, March 23. Pickup will be on Mondays and Thursdays between 10 a.m. and 2 p.m. (more on that here), and just judging from the first week’s menu, nutritionists are going to be pretty happy. 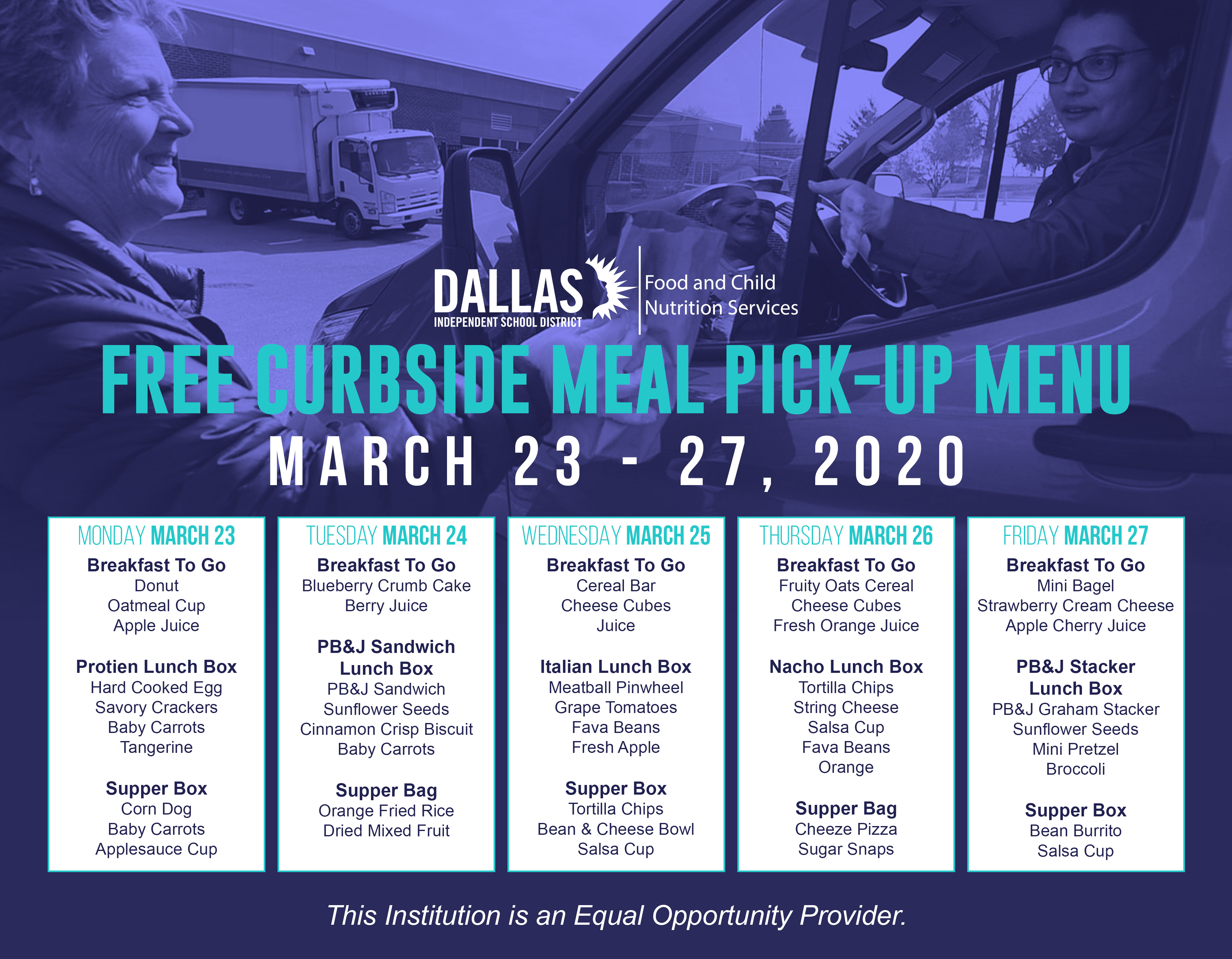 Three Dallas police officers are in quarantine after another officer tested positive for COVID-19, the Dallas Police Department confirmed Thursday.

The officer works in the northeast patrol division, and will remain in quarantine for up to 14 days.

The department also said in a statement that it was prepared for more officers to potentially fall ill.

“We know that some of our officers will contract the virus,” officials said, adding that the department is working with Dallas County Health and Human Services to determine what comes next, and is sanitizing the northeast patrol building.

Also Thursday, the department said that while headquarters downtown would remain open during regular business hours, it would encourage visitors to file reports online, and that there would be changes to certain procedures.

The same day Dallas County Judge Clay Jenkins ordered a 60-day halt on eviction hearings by Dallas County justices of the peace, U.S. Department of Housing and Urban Development Secretary Ben Carson authorized an immediate foreclosure and eviction moratorium for single-family homeowners with FHA-insured mortgages for the next 60 days.

The moratorium directs mortgage providers to halt all new foreclosures, suspend foreclosures currently in process, and cease all evictions from FHA-insured single-family properties.

The Birthdays Will Go On

And finally, for a little bit of frivolity of some importance, although CAMP Dallas is closed for the duration, CAMP’s Chief Experience Officer, Amanda Raposo, said the company has come up with an idea that will provide families and friends a way to celebrate with their favorite March and April birthday kids – while still honoring social distancing.

“You and your family and friends can log on and we’ll have games, performance, a happy birthday song, and of course, a virtual dance party,” Raposo said in an email.

The company will hold virtual parties every day at 4 p.m., and while there may be more than one child celebrated at each party, Raposo said that each child will get a special call-out during the party.

To sign up, you simply go to this form, fill it out, and wait. CAMP will reach out with a link to join the birthday party, and you can share it with family and friends, who can join in.

CAMP will livestream the party on its various social media platforms, too.

“We hope we can help spread some joy and warmth to your family through this weird time,” Raposo wrote. “Birthdays don’t get postponed.”