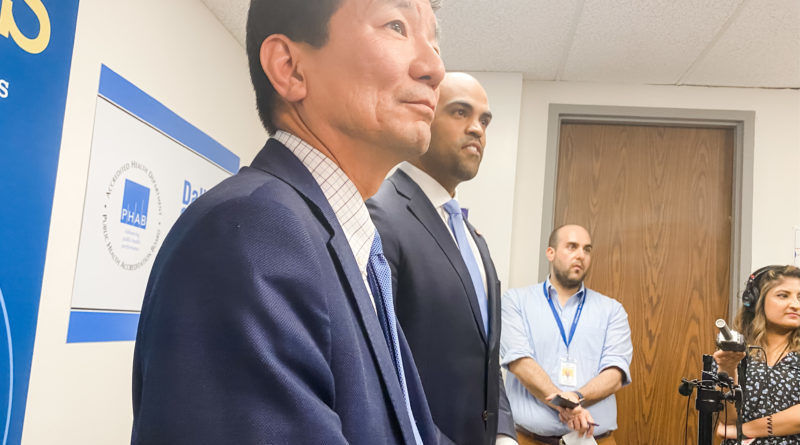 As I’ve mentioned before – the 9-year-old that lives in our house has, by default, become quite the little expert in COVID-19.

It can’t be helped when your father works to help a hospital communicate about it, and when your mom is reporting on it. He now can tell you why masks are important, the best things to do when you come back from the grocery store, and whether or not you need to quarantine your mail.

And he also knows the major players, and has watched many a press conference with me. It’s the STEM education nobody thought we’d be teaching, but here we are.

So suffice to say, when I told him yesterday that I needed him to be quiet while I had a quick phone interview, he was full of questions.

Tiny: “Who are you talking to now? The governor? Batman? Some rando?”

Me: “Uh, no. I’m going to talk to Dr. Huang with the county health department …”

Tiny: “OH MY GOD BURY THE LEDE MOM. He’s only the smartest man in Dallas County.”

Me: “He is definitely responsible for a lot of things right now, that’s for sure.”

I was not prepared for the amount of fanboy my child brought to the table, but I hope you come away from the following conversation with Dr. Philip Huang, director of Dallas County Health and Human Services, feeling a little smarter – after all, it’s a conversation with, apparently, the smartest man in Dallas County.

My original reason for talking to Dr. Huang was, by the way, to better understand some questions and comments our readers have made on our Facebook pages.

PN: We get a lot of comments about the survival rate of this virus – namely, people repeating that figure that 98% survive it. And we’ve shared some information about what that statistic actually means, but could you explain what that means when someone points that out – what they’re actually saying?

Huang: “Well, I mean, you’re talking about a 2% mortality rate, which means for every hundred people, two people are going to die – which is pretty horrific.”

PN: And those other 98 who do get it – it’s no picnic for them either, right?

Huang: “Right. And while still, a majority may have mild symptoms, again, 2% dying is a very high – that’s two people dying for every hundred persons. That’s pretty bad.”

Huang: “It’s no one specific number, but it’s more trends. If we see 14-day trends in some of those numbers, that’s when we will know if it’s going down, and that would be good. And if things are going up – that’s not a good thing.”

PN: How concerned are you with this UT Southwestern research that’s indicating that we could have a massive resurgence this summer?

Huang: “That’s obviously very concerning. It would mean a lot of deaths, a lot of severe illness, and potentially really causing a lot of turmoil in our healthcare system.”

PN: Has anything surprised you about the public response to the pandemic?

Huang: “I don’t really think this came as a surprise to me, but I do think the public responded well to shelter-in-place, and it worked.”

PN: Early on, I saw someone point out that if this shelter-in-place measure worked and flattened the curve, there would be one group that would say, “Oh, wow, this totally worked,” and another that would say, “Everyone overreacted.”

PN: What are you and your family doing to be safe? What’s your comfort level with going out in public spaces right now?

Huang: “You know those guide documents with the red, orange, yellow, and green? That. I think that’s what the experts have recommended as the appropriate sort of level of activity and response right now.”

PN: What do you find yourself missing?

Huang: “I think a lot of people have found they’ve been slowing things down a bit. I think that people have spent a lot more time cooking and not just going out all the time, but spending time at home with their families and things like that, which is nice.”

One thought on “Sheltered Diaries: The Smartest Man in Dallas County”