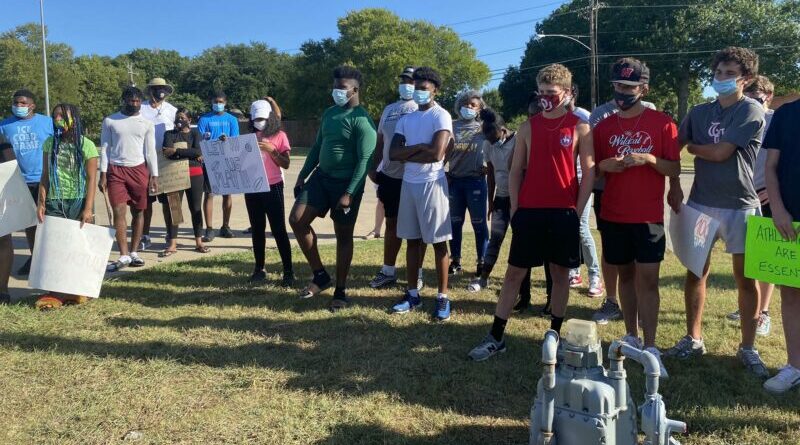 On the heels of news from Dallas County health officials that the county is moving from the highest risk level to a lower one for the first time since May, Dallas ISD announced it will begin phasing in certain extracurricular activities – including athletics.

It was a move telegraphed as a possibility by Dallas ISD superintendent Michael Hinojosa at last week’s school board meeting.

The district’s decision to hold off on extracurricular activities – and athletics in particular – met with resistance from student-athletes, who demonstrated twice last week to reiterate their desire to start playing again.

“So we were allowed to do summer strength and conditioning for a little bit. And then they had canceled that,” said W.T. White student athlete Noah Samples, who plays football, basketball, baseball, and golf. “And then this past Monday when the first protest was, we were supposed to start that Monday. But since they said that we couldn’t practice any more than that’s why the protests happened that Monday.”

Samples said that he felt most athletes would be willing to do whatever was necessary to get back to practice and playing games.

“If they’re trying to keep us safe, I think a lot of people would wear long sleeves, gloves, tights, visors, masks – they would do any means necessary if it means we get to play football again,” he said.

For Samples and his teammates, playing sports isn’t just fun and games – for many, it means the difference between attending college and not.

“A lot of kids don’t have a lot of film and they need more games to get more film in order to get recruited. So if there’s no film, then there’s no recruiters that can see how they play,” he said. “And then there probably won’t be as many offers given to kids. And that’s probably their only way out for some people.”

We’ll have more of our conversation with Samples in our October issue of Preston Hollow People.

The district’s announcement paves the way for the start of athletic conditioning and other UIL activities beginning Sept. 8 – outdoors.

On Sept. 8, varsity-level cross country, football, golf, swimming, team tennis, and volleyball can restart. On Sept. 14, junior varsity and freshman athletes in those sports can also start their seasons. On Sept. 21, UIL marching band, drill team, and cheerleading can start.

“The in-person athletic activities will be subject to all approved district safety protocols,” the district explained.

Campus coordinators will be instructed on the details of Centers for Disease Control and Prevention and UIL safety protocols, which will be strictly enforced. All schools will start a “small group instruction” model to minimize the number of student-athletes on campus at any given time. Strength and conditioning will happen outdoors, and marching band, drill team, and cheerleading will require safety protocols for participation.

Central office athletic directors and athletic trainers, as well as visual and performing arts staff will monitor the re-entry, and campus visits will be conducted to make sure the protocols are being enforced.

The news was met with excitement by athletes, including SMU commit Jayleen Record, who organized both protests and has been an arden spokesperson for the return of high school sports.

The district also said that some special education services will start phasing in by appointment on Sept. 8, with parent opt-in beginning Sept. 17.

A draft document shared by Dallas ISD trustee Dustin Marshall on Facebook showed more adjustments could be afoot based on the newest county guidance, too. Marshall stressed that it was only a draft document at this point, and “The Administration will be meeting tomorrow to make a final decision and will communicate with families soon thereafter.

On Oct. 5, when the first four weeks of distance learning ends, all other grades would begin to report to campus.

Parents, according to state mandates, will be able to choose between on-campus or online instruction throughout the school year, and all school districts must offer both.

Dallas County Judge Clay Jenkins and Dallas County Health and Human Services director Dr. Philip Huang explained Wednesday afternoon that the move to orange – and how long it lasts – depends largely on a continued downward trend, something that will only be achievable with continued masking, limiting unnecessary social interactions, and having good social distancing practices during the Labor Day weekend.

We’ll have more about the county’s guidance in tomorrow’s digest, but among the new relaxed guidelines is guidance that the risk is lower for young students – from pre-kindergarten to second grade – to attend in-person instruction. Middle School and high school students should wait, and upper elementary students can return if adequate social distancing, masking, and other precautions are possible.