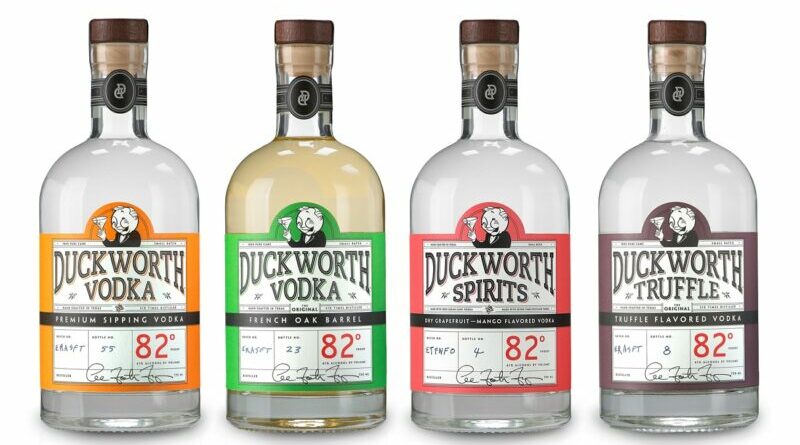 “Want to see my diamonds?” he asked, catching me off guard as I was trying to name the Led Zepplin song playing in the background. Lee Fuqua knows how to get a girl’s attention, and I followed him past a giant worktable and brown boxes stacked Nowitzki high. There they were on the floor, hundreds of sparkling diamonds lying in repose inside a four-inch long see-through pipe connected to black industrial tubing. The lights were dimmed, and Lee aimed a bright, white light on the stones which made them sparkle even more.  “These must be worth millions,” I teased.  “No, about four dollars,” he replied. “Worth every penny.”

Lee Fuqua’s award-winning Duckworth Vodka is made with 100% Texas pure cane sugar and distilled seven times, including through the Herkimer diamond gauntlet I stepped around on the floor of the distillery, giving it an extremely clean, pure, neutral non flavor, which is how vodka is supposed to taste. Or not taste.

Lee is a local guy, he started as a Bradfield Bronco and graduated as a Scot before heading off to Baylor, an unlikely choice for a future winemaker and vodka distiller. He spent a few years in the advertising business but he and his wife Julia are lifelong foodies who had a passion for travel and a creative pursuit. They attended culinary classes at El Centro and pursued their culinary hobby relentlessly, traveling near and far to taste the best wines and cuisines wherever they went.

As a student of wine and its history, Lee was familiar with Thomas Volney Munson, a late 19th century viticulturist who is credited for saving the European grape and wine industry from ruin from a fatal vine fungus. Grayson College honored the late T.V. Munson who became a resident of Denison to study the biodiversity of Texas and its grape-growing potential, by naming a vineyard for him as well as the T.V. Munson Enology and Viticulture Center at the college.

Lee took his passion to the next level when he attended and graduated first in his class from Grayson College’s Enology and Viticulture program and started Fuqua Winery in Dallas, right behind the Home Depot on Lemmon Avenue. He began making wine from Texas-grown grapes he sourced directly from growers.

After years of tasting and researching wines in the European style, he found success with his Fuqua Zinfandel and Syrah which gained attention, accolades, and fans, while his Orange Muscat won best amateur wine in a Texas competition.

But, back to vodka since we are celebrating National Vodka Day October 4.

After Lee was diagnosed as a diabetic in 2014, he switched from wine making to vodka, naming the brand Duckworth after his maternal grandfather, H.E. Duckworth, who was a pioneer in the fruit juice business, says Lee.  Fuqua studied distillation and dove head-first his new passion, creating the most pure and neutral vodka he could make. A year after he launched Duckworth vodka, but before he sold any product, he entered several competitions for amateur craft spirits.

Lee’s vodka won its first medal, a bronze, in the 2015 San Francisco World Spirits Competition. Later that year, he upgraded to a silver medal at the Craft Competition in Los Angeles.  Each medal was only moderately satisfying to Lee and he marched right back into the Atwell Drive distillery to make a better vodka.  That determination paid off with a gold medal earned at the Beverage Testing Institute’s International Review of Spirits. He’s been selling Duckworth Premium Sipping Vodka ever since.

Today, Duckworth Vodka is distributed throughout Texas and major retailers and boutique wine and spirits stores. The product line has expanded to include a beautiful French Oak Barrel vodka in which the Premiums Sipping Vodka is rested in French Oak Barrels that Fuqua held onto from his wine-making days. The oak from Vosges is lightly toasted to accentuate the flavor and coax out the vanillin which gives this vodka a whiskey-like nose and taste. It’s stunning.

Lee also crafted a Truffle Vodka which is made by infusing the original vodka with French black winter truffles which lord over the Herkimer diamonds in five-gallon glass carboys, shaved truffles lining the bottoms. The latest addition to the vodka line is Dry Grapefruit-Mango, which is made from natural grapefruit and mango flavors and completely sugar free, unlike most other flavored vodkas.  H.E. Duckworth would be proud of this concoction.

Duckworth Distillery is located at 3737 Atwell Street, Suite 203 in Dallas.  There is a tasting room open to the public and where small amounts of the vodka can be purchased.  When COVID hit and hand sanitizer was hard to come by, Fuqua made Duckworth Hand Sanitizer and made sure first responders throughout Dallas had it in their hands when they needed it.  You can also pick up a bottle or two and a refill of the hand sanitizer at the distillery.

Prior to COVID, Lee and Julia, who is a member of the prestigious Les Dames d’Escoffier International organization for women in the culinary, hospitality and fine beverage industries, were fixtures on the Dallas food festival scene, promoting their vodkas and exposing foodies to this fabulous Dallas distillation.

It’s always nice to learn about a Highland Park student who stays close to home and makes a name for himself or herself.  Lee Fuqua has a passion for fine spirits and has worked hard to be successful. Look for Duckworth London Dry Gin launching soon.  I look forward to tasting it and including it in a story about National Gin Day which will be next June if you’re keeping a calendar.

For more information on Duckworth Distillery and to check tasting room hours of operation, please visit the website at www.duckworthvodka.com.