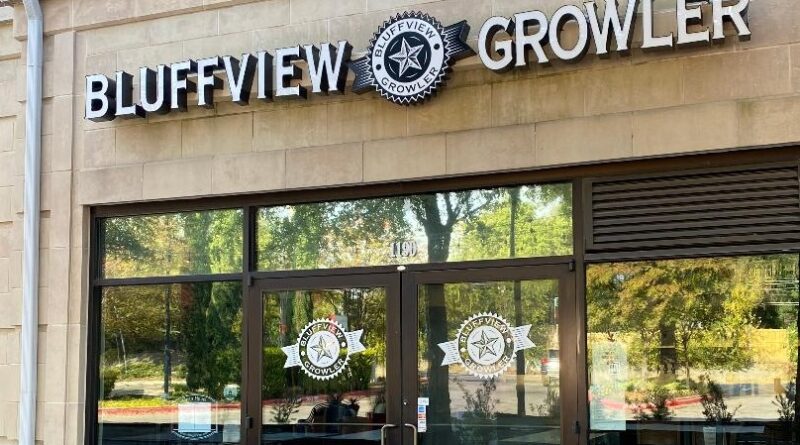 It’s a neighborhood place, Bluffview Growler.  The kind you take your kids to after a soccer game and recognize the faces you see there every Thirsty Thursday.  The sister of Lakewood Growler has been open since January 2017, quietly serving craft beers from 45 taps in a cozy taproom designed by co-owner Stacie Czech who also just happened to make the tables and benches where guests convene.

“I first learned woodworking in junior high, 8th grade,” Stacie tells me. For Bluffview Growler, she made 10 interior tables and two benches by herself, and the two large tables on the patio with the help of her dad. She also built tables, benches, and barstools for Lakewood Growler.

“When I’m making the tables and decorating the spaces,” she adds, “I think about all the people who will be sitting in them and creating memories at our place.”

Dale and Stacie Czech are the owners of Lakewood and Bluffview Growlers.  They’ve been corporate stiffs and entrepreneurs but neither suited them quite as well as this gig, which started in 2014 when they returned to Texas after five long winters in Dale’s ancestral home state of Wisconsin.

As a taproom, Bluffview Growler’s primary source of revenue was alcohol, which hurt them when bars were shuttered per the governor’s orders. Although they had been selling i Fratelli’s pizza at Bluffview Growler, it did not account for at least 51 percent of sales. It was a bar, not a restaurant and restaurants could remain open, bars could not.

To survive, Stacie and Dale knew they needed to prepare and provide food to their guests. They applied for and received a restaurant permit from the TABC that allowed them to reopen.

Enter Robin Jackson, Stacie and Dale’s dear friend from their childhood days in Amarillo. The women’s relationship goes all the way back to that wood shop class when Robin’s now husband, Carl, and Stacie took shop together in 9th grade. Stacie and Carl competed against each other in the UIL Texas State Competition. Carl made a beautiful china hutch and Stacie made a waterbed. “It was the 80s!,” she laughed. Stacie’s waterbed beat Carl’s china hutch, but the friendship endured.

In addition to being the wife and best friend of award-winning woodworkers, Robin Jackson is a former marketing executive with a knack for hospitality and a talent for home cooking. An amateur caterer for several years, Robin has proven culinary skills and was an obvious solution for Stacie and Dale’s need for food service. The plan evolved quickly and full menu offerings arrived in September, just in time for patio weather.

The Czechs, who are self-confessed “beer nerds” worked with Robin to develop a menu made up mostly of Robin’s grandmother’s and mother’s recipes.  Classic bar food such as soft pretzels and cheese, Saucy Savories Wings (named for Robin’s catering company, Saucy Savories) and pulled pork sliders are offered alongside impressive entrees such as Crawfish Ya-Ya Sauce Pasta, pan-seared Tilapia and Farfalle Bolognese.  There are sides and salads on the menu and a nice dessert menu which includes a mini vanilla cake with a stout beer reduction sauce and buttercream icing.

Robin wisely knows who has the most important vote when deciding where to hang out, so she created “Treats for 4 Feets,” homemade doggie treats that are sold three per order for $4.50.

Bluffview Growler’s beer selections vary greatly, representing breweries from near and far, including Peticolas, Martin House, Bell’s and Karbach. With up to 45 taps in play at any time, the beer drinkers will have plenty of reasons to revisit.  They have also launched day-of-the-week specials such as Wine Down Wednesday which offers $2 off wines by the glass and a $25 charcuterie board and Friday’s Taps & Tapas, $1 off beer and appetizers.

This place reminds me of the beer gardens in Germany that are family owned and operated, where family heirlooms and artwork decorate the space, and family cooks in the kitchen. Those places are for families by families and the Czech family has the German bier garten vibe down perfectly.

Check out the ever-changing taplist here, follow Bluffview Growler on Instagram for stories and specials (hint, check out their plans for Black Friday!).