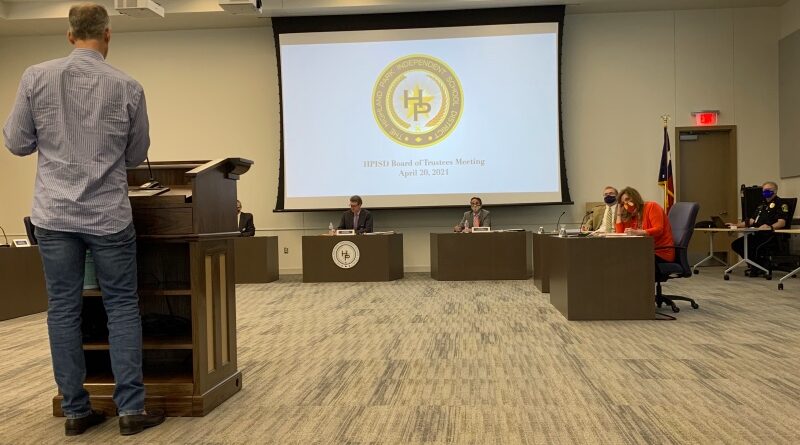 (Editor’s Note: This story has been updated with additional comments from Aimee Urista and Jon Dahlander.)

Some Highland Park ISD parents have expressed concern during recent school board meetings about ‘critical race theory’ being taught in classrooms, but HPISD chief of staff and communications director Jon Dahlander said “critical race theory is not part of the curriculum. Period.”

As Time Magazine reported last fall, the intellectual movement behind the idea of ‘critical race theory’ was started by legal scholars as a way to examine how laws and systems uphold and perpetuate inequality for traditionally marginalized groups. In Richard Delgado and Jean Stefancic’s book Critical Race Theory: An Introduction, they define the critical race theory movement as “a collection of activists and scholars interested in studying and transforming the relationship among race, racism, and power.”

Aimee Urista, who has a first grader in the district, spoke about her concern about ‘critical race theory’ being taught in the classroom during the April 20 board meeting.

Urista acknowledged, though, that she was told by district officials that there was “no evidence that CRT is being taught in our school nor part of our curriculum.”

“You know that social emotional learning is actually a vehicle for CRT. It’s a psychological training that promotes analysis of many aspects of our children’s lives through a prism of race,” she said.

Urista said in an email to People Newspapers that she was concerned about content about Black Lives Matter on the online educational platform BrainPop.

“Brain Pop and Brain Pop Jr. are two of more than 190 approved technology resources that are available to teachers for use at their discretion in their classrooms,” Dahlander explained. “Dozens, if not hundreds, of videos on a wide variety of topics including reading, writing, math, science and social studies are available for classroom use. They are used by teachers at appropriate grade levels and connected to the curriculum as one of many teaching tools.”

School safety legislation signed into law by Gov. Greg Abbott in 2019 requires all Texas school districts to add a social/emotional learning component to their curriculum, he added.

“This component requires positive character traits, such as courage, trustworthiness, integrity and respect, among others, to be integrated into the curriculum,” Dahlander said. “In short, HPISD is following the law and requirements from TEA.”

Monty Bennett, CEO of Ashford Inc., a hospitality services firm, and publisher of the Dallas Express news site, read during the April 20 meeting from the book, Not My Idea: A Book About Whiteness, a picturebook about racism and racial justice that he says he was told came from a library in the district.

“Some of the things written in the book here are the kind of things that I think a lot of us have a lot of objections to,” Bennett said.

Dahlander, however, said the book “is not listed in any of our school library catalogs, nor have we been able to find it on any of our campuses.”

“The lead librarian at MIS/HPMS does not recall seeing the book or ordering the book,” he added.

People Newspapers reached out to Bennett after the school board meeting for additional comment, but didn’t hear back at the time of this post. This story will be updated if we receive more information.

As we previously reported, sources who saw a recent flyer supporting Highland Park ISD Place 1 trustee candidate Kelli Macatee that referred to her opponent Doug Woodward as a “New Jersey Liberal,” who, it claims, “says #1 Quality For Teachers is Diversity, Not Teaching Qualifications” and “recently worked as P&G’s ‘Diversity Officer,’ whose materials stated that all white people are racist, just for being white,” said it appeared to be from Metroplex Citizens for a Better Tomorrow.

According to the Texas Ethics Commission website, the PAC was formed on March 29, and its treasurer is Monty J. Bennett.

Bennett didn’t confirm or deny involvement in the flyer, but took issue with our reporting.

“Everyone knows that there’s really no point in responding because the left-wing media’s bully culture is to twist whatever anyone says into making a conservative look bad and a lefty look good,” he said when asked about the flyer. “Everyone also knows that Kelli is the conservative and Doug’s the lefty. There’s no point in countering the misrepresentations and distortions in this article.  I will be shocked if even this whole quote is included.  And journalists wonder why no one likes them.  That’s why I had to launch the non-profit ‘Dallas Express’ newspaper.”