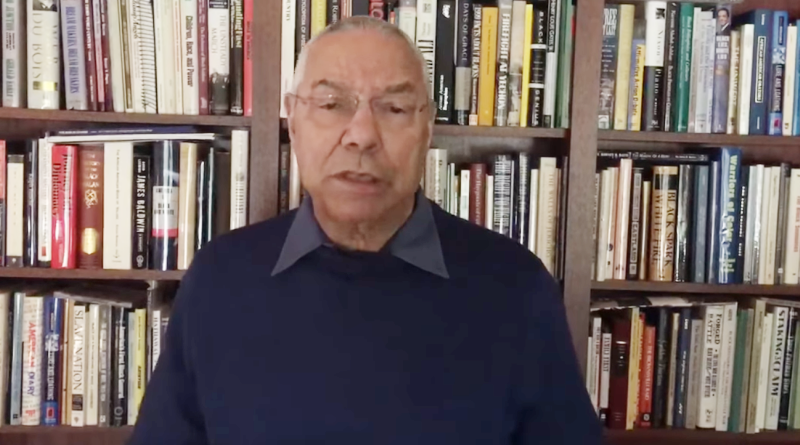 Colin Powell, who served as the country’s first Black U.S. secretary of state as well as a national security advisor and Chairman of the Joint Chiefs of Staff, died Monday at 84 from complications from COVID-19.

“He was fully vaccinated,” his family said in a brief statement on Facebook. “We want to thank the medical staff at Walter Reed National Medical Center for their caring treatment. We have lost a remarkable and loving husband, father, grandfather, and a great American.”

Powell had multiple myeloma, several news outlets reported. The blood cancer can impact the body’s ability to fight infection, putting them at higher risk for complications from COVID-19.

Powell served three Republican presidents during his career and was the top U.S. general when U.S. troops fought Iraq and drove its troops out of Kuwait in 1991. He was U.S. Secretary of State when the U.S. invaded Iraq in 2003.

“He believed in the promise of America because he lived it,” said President Joe Biden before ordering flags flown at half staff. “And he devoted much of his life to making that promise a reality for so many others.  He embodied the highest ideals of both warrior and diplomat.  He led with his personal commitment to the democratic values that make our country strong.

“He repeatedly broke racial barriers, blazing a trail for others to follow, and was committed throughout his life to investing in the next generation of leadership.  Colin Powell was a good man who I was proud to call my friend, and he will be remembered in history as one of our great Americans.”

“He was such a favorite of Presidents that he earned the Presidential Medal of Freedom – twice. He was highly respected at home and abroad.  And most important, Colin was a family man and a friend.”

“Laura and I are deeply saddened by the death of Colin Powell,” said George W. Bush. “He was a great public servant, starting with his time as a soldier during Vietnam. Many Presidents relied on General Powell’s counsel and experience. He was National Security Adviser under President Reagan, Chairman of the Joint Chiefs of Staff under my father and President Clinton, and Secretary of State during my Administration.

“He was such a favorite of Presidents that he earned the Presidential Medal of Freedom – twice. He was highly respected at home and abroad.  And most important, Colin was a family man and a friend. Laura and I send Alma and their children our sincere condolences as they remember the life of a great man.”

Former President Barack Obama said that he was appreciative of Powell’s endorsement in 2008, and the way he did it, taking the opportunity to address rumors about the candidate.

“At a time when conspiracy theories were swirling, with some questioning my faith, General Powell took the opportunity to get to the heart of the matter in a way only he could,” Obama recalled. “’The correct answer is, he is not a Muslim; he’s a Christian,’ General Powell said. ‘But the really right answer is, ‘What if he is?’ Is there something wrong with being a Muslim in this country? The answer’s no, that’s not America. Is there something wrong with some seven-year-old Muslim-American kid believing that he or she could be president?’

“General Colin Powell understood what was best in this country, and tried to bring his own life, career, and public statements in line with that ideal,” the former president added on Twitter. “Michelle and I will always look to him as an example of what America—and Americans—can and should be.”

“Colin Powell was a giant,” said Dallas Mayor Eric Johnson. “I have long admired him, and I was blessed to have the opportunity to spend some time with him before the pandemic in 2020. He was kind, thoughtful, and gracious. I will always cherish that memory.”

Bethany Erickson, Digital Editor at People Newspapers, cut her teeth on community journalism, starting in Arkansas. Recently, she's taken home a few awards for her writing, including first place for her tornado coverage from the National Newspapers Association's 2020 Better Newspaper Contest, a Gold award for Best Series at the 2018 National Association of Real Estate Editors journalism awards, a 2018 Hugh Aynesworth Award for Editorial Opinion from the Dallas Press Club, and a 2019 award from NAREE for a piece linking Medicaid expansion with housing insecurity. She is a member of the Education Writers Association, the Society of Professional Journalists, the National Association of Real Estate Editors, the News Leaders Association, the News Product Alliance, and the Online News Association. She doesn't like lima beans, black licorice or the word synergy. You can reach her at [email protected]newspapers.com.