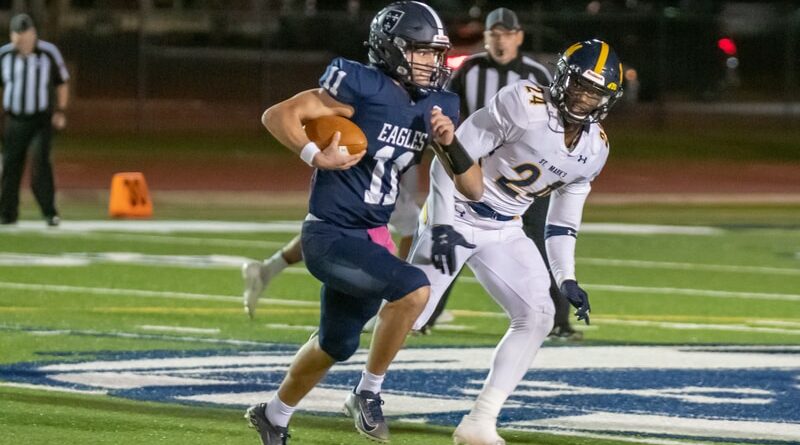 Episcopal School of Dallas already had its spot in the SPC championship game prior to its regular-season finale on Friday.

But the Eagles still had goals to accomplish, including an unbeaten record and a continuation of its winning streak against rival St. Mark’s.

They responded with a convincing 51-30 victory at Jones Family Stadium for their eighth consecutive triumph over the Lions.

Now the focus turns to a rematch against Houston Kinkaid for the SPC title in Class 4A, with kickoff set for 1 p.m. on Nov. 6 at Jesuit’s Postell Stadium.

The Eagles (10-0) will seek their first conference crown since 2014, and their first ever in the large-school division. ESD topped Kinkaid 31-21 on Oct. 8, handing the Falcons (8-2) their only loss in SPC play.

Back to Friday, Patrick Burke threw five touchdown passes to lead the high-powered ESD offense, and he also rushed for a game-high 116 yards.

Two of his scoring tosses went to Blair Brennan, who finished with 13 receptions for 193 yards. Collin Nicholson added two touchdowns — one on the ground and one in the air — while Jaden Robinson grabbed a pair of short touchdown strikes from Burke.

St. Mark’s took an early 6-3 lead after a Zack Stone interception in the first quarter, followed by a long pass from Asher Wilburn to Connor Duffy, and a short touchdown run by Wilburn.

The Lions (5-4) engineered two more touchdown drives in the third quarter, trimming the deficit to 31-24 on a scoring pass from Wilburn to Duffy. However, turnovers on back-to-back drives stifled that momentum and enabled ESD to pull away late.

Wilburn passed for 294 yards and two touchdowns while running for three scores. Duffy had 165 receiving yards on five catches. Niles Harvey ran for 108 yards on 17 carries.

The Lions, who capped a promising first season under new head coach Harry Flaherty despite dropping four of their last five games, equaled the highest scoring output against the ESD defense all season.

Meanwhile, Grant Jungerman made three field goals for the Eagles, who overcame two turnovers and 111 penalty yards. They accumulated 591 yards of total offense.