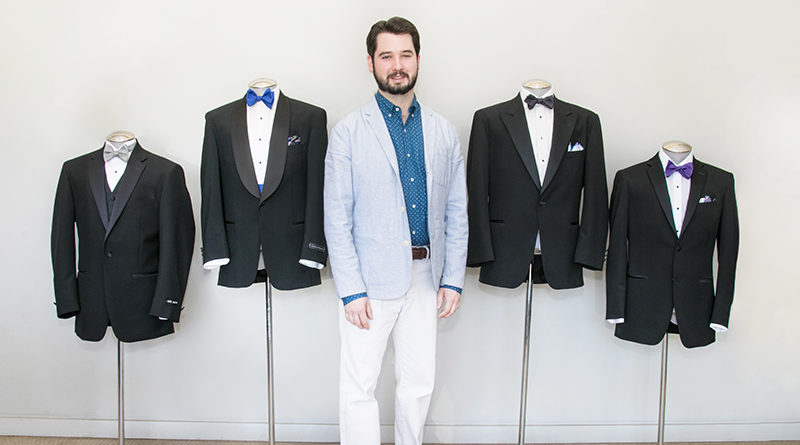 The Highland Park High School graduate bought the Snider Plaza tailor and tuxedo rental shop in May – a deal prompted by a December 2017 conversation with longtime operator Harold Bell.

“I was working next door doing commercial real estate with my father, and I just got to know Harold every day by walking by,” Langhenry said.

“We’d just kind of stop by and talk all the time and one day he just said, ‘Hey, I’m worn out, and I’ve been doing this for 40 years. I’d like to pass the torch on and retire, so would you like to buy the business?’”

“I’m just looking forward to filling in his shoes and seeing what we can do to make it keep going for the next generation.” -Billy Langhenry

Mister Tuxedo opened in the 1950s with Bell buying it from his father in 1961 and moving the store a short distance from its original location in what’s now the Kuby’s building in 1961.

Over the years, Mister Tuxedo has helped thousands of Dallas residents look their best for countless weddings and black-tie events.

Looking to carry on that legacy, Langhenry spent eight months working alongside Bell.

“I call it baptism by fire,” Langhenry said. “It was hectic because I was here every day during some of the busiest seasons, like prom and prime wedding months.”

Since taking ownership, Langhenry has set out to not only continue what Bell started but to also build upon it.

Langhenry has paid attention to the trends that young men like himself enjoy.

“For men now, I think people like to make a statement,” he explained. “Everyone wears a black tux, so to mix it up I’ve put a lot of fun different colored bow ties out.

“I love to go to events with a different colored bow tie and have people come up to me asking where I got it from.”

Other new touches include custom cufflinks featuring such personal touches as monograms, Texas flags, and even Highland Park’s Scottie.

Much like how it used to be, Mister Tuxedo remains a family business.

Langhenry’s mother helps from time to time with other tasks such as dry cleaning.

For Langhenry, this is how he feels it should be, both in the present and for the next person to take up the mantle.

“Harold did a great job with everything, and I’m just looking forward to filling in his shoes and seeing what we can do to make it keep going for the next generation.”