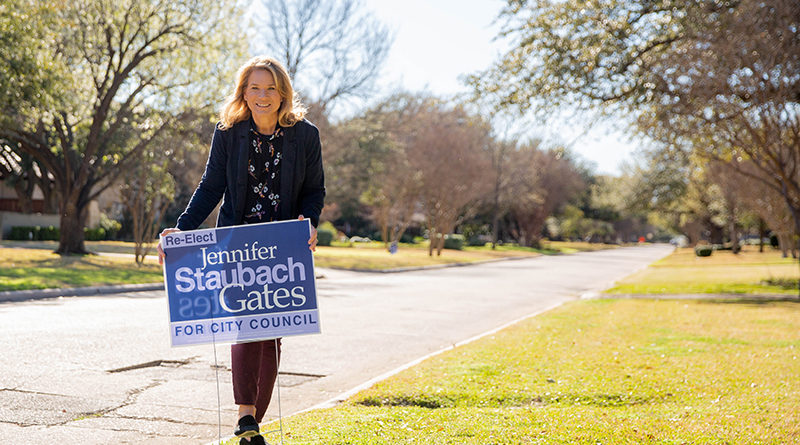 In the weeks leading up to the May 4 election, residents chartered buses to Dallas City Hall to rail against the prospect of 24-story-high residential towers “behind the pink wall.”

(ABOVE: Jennifer Staubach Gates won her fourth term by a nearly 2-to-1 margin. Photo by Katie Chiu)

But election results made it clear that objections to proposals for Preston Center and the condominium area known as Planned Development 15 were not nearly great enough to unseat a popular three-term city council member.

If the District 13 race was a referendum on Northwest Highway redevelopment, Jennifer Staubach Gates’s approach – one of hearing from residents, property owners, and developers before making a decision – won soundly.

“That anger was not as widespread as Miller’s supporters may have thought,” Wilson said.

Miller carried only three of 47 precincts, while tying in two others.

Jon Anderson, a real estate columnist who has written for Candy’s Dirt, D Magazine, and Preston Hollow People, noted how Miller carried the two precincts around the pink wall and Preston Center by only a 60/40 split.

“That anger was not as widespread as Miller’s supporters may have thought.” -Matthew Wilson

(ABOVE: Hundreds turned out for a debate between Jennifer Staubach Gates and Laura Miller. Photos by Elijah Smith)

“This is a far cry from Miller’s routine assertions that 90 percent of residents opposed Jennifer Gates and the process she’s enabled to bring PD-15 up to date,” he said.

Gates made temperament and style an issue in the race, presenting herself as the leader able to work with all stakeholders and willing to withhold judgment until the zoning process has allowed all voices to be heard.

“I’m the one who is going to be able to get things done,” Gates told those who attended an April debate Preston Hollow People presented at the Jesuit College Preparatory School of Dallas.

More than 500 people made reservations and newspaper staff checked in 343 people before the debate began.

“I am happy that I ran,” Miller said after the election, adding she was “content with the knowledge that I did everything I could to give people a choice for an alternative development vision for the future.”

During the debate, Miller held up a copy of that vision, the Northwest Highway and Preston Road Area Plan adopted in 2017.

The plan would limit new construction to four floors behind the pink wall in Planned Development 15, a 14-acre area near Preston Road and Northwest Highway, instead of the 24 levels proposed now.

The Planning Commission could vote on the zoning in early June.

The plan also called for replacing the Preston Center garage with underground parking topped by a street-level park instead of an above-ground garage and apartment tower being discussed now.

Gates has so far not taken a position on either PD-15 or the Preston Center garage.

“The authorized hearing process is ongoing regarding PD-15,” she said. “I will continue to evaluate the best development outcome for the community. My hope for the Preston/Northwest Highway area is we work to achieve the vision established in the area plan. I am encouraged the stakeholders can work to achieve a work, live, and play balance. The future of the entire area continues to be important for both the district and the city.”

William Taylor contributed to this article.

Nobody at DSW Wants to Get Slapped