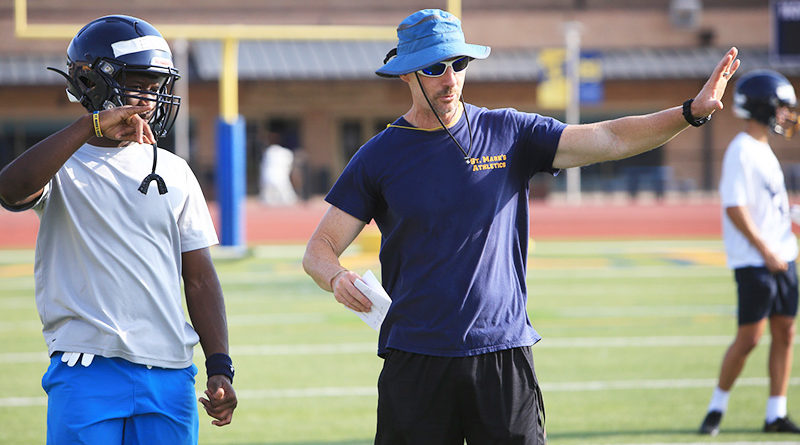 Hayward Lee hasn’t been a varsity head football coach in 12 years, but he expects the transition into his new role to be seamless.

Once again, Lee is the sideline boss at St. Mark’s, reclaiming a role he held from 2003 to 2007 when the Lions posted a 30-9 record and won two SPC titles under his leadership.

The job came open when Bart Epperson left after 11 years and relocated to Fort Worth with his family — he’s now an assistant at Fort Worth All Saints.

“It’s all about relationships and connecting with kids, and using the game as a vehicle for making great men.” -Coach Hayward Lee

It turns out he didn’t need much convincing. Lee has been the varsity lacrosse coach at St. Mark’s since 2004 and held a variety of assistant roles with the football program under Epperson.

“I was not planning on this happening. I was happy being here, supporting Bart,” Lee said. “I’m honored to serve my school in whatever capacity they ask me.”

Lee’s career has come full circle before. He coached the powerhouse St. Mark’s lacrosse team for a decade before retiring in 2013 — following the school’s only state championship — then returned three years later.

As during his first stint, Lee intends to continue coaching lacrosse in the spring, at least for now. The Lions have several athletes in both sports.

“I’ve got a number of kids that I’ve coached in lacrosse,” said Lee, who received the Earl Bill Award for Lifetime Achievement from the Texas High School Lacrosse League after a state runner-up finish in 2018.

On the football field, he takes over a program that likely will need to rebuild after finishing 4-4 last year in the SPC’s large-school division with a senior-laden roster.

Lee said that while his responsibilities will increase this season, his character-based coaching philosophy has remained constant since arriving at St. Mark’s 16 years ago.

“The head coach is responsible for everything, so that’s different,” Lee said. “But coaching hasn’t changed. It’s all about relationships and connecting with kids, and using the game as a vehicle for making great men.”