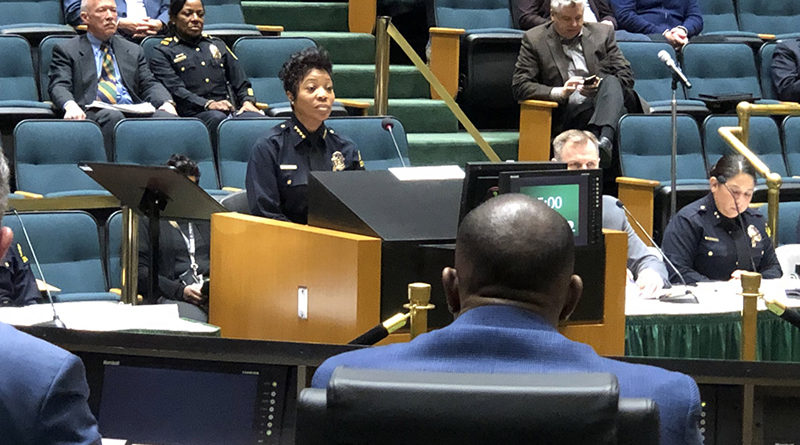 “But as we approach 2020, it is my expectation that our city staff and our police department will work more aggressively and transparently toward making Dallas safer,” he said. “While I believe Dallas remains relatively safe for a major U.S. city, the level of violent crime we have seen through 11 months of 2019 is patently unacceptable.”

The response has been underwhelming, with council members criticizing the target (reducing violent crime by 5% this year), and a goal to reduce robberies, murders, and aggravated assaults by 10% in the four patrol divisions (southeast, southwest, south-central, and northeast) hardest hit by violent crime.

Hall told councilmembers that her goals were realistic and data-driven, but that she believed her department would exceed them.

“I would like to see a 50% goal, but if you don’t make a goal, well that’s OK, but if your goal is 5%, well, guess what, that’s probably the best we’re ever going to do,” she said, adding that she didn’t think Hall had a grasp of the underlying problems.

“I’m not sure how you can have this plan when you haven’t articulated what is the problem,” she said. “Is it drugs, is it gangs? What’s the issue causing this?”

“I don’t think our community is going to say, ‘Our sense of safety has improved because we have a 5% decrease,’” Gates said. “The community does not feel safe. That’s what we’re hearing when we’re out at neighborhood meetings.”

On Twitter, Johnson echoed Mendelsohn and Gates, saying, “I won’t let ANYONE tell me that it is ‘unrealistic’ to lower violent crime in the City of Dallas to the level it was at just one year ago.”