What is the single most common issue voters have raised with you during your campaign, and how do you plan to tackle it?

Carlos Quintanilla: Drugs, crime and Jobs 1. I plan on pushing for decriminalizing Vaping THC a State Jail Felony with a lesser sentence of Diversion and Drug Treatment. This is an alarming issue that is going on without any response. Young people are being convicted of Felonies, after obtaining a Deferred Sentence, only to test negative and have their probation revoked and resentence to State Prison. 2. I will work diligently to secure funding for the creation of Vocational training programs in every City that is part of the 33rd Congressional District. 3. I will work with sports and recreational programs to include tutoring programs, after school programs and mentoring programs for Children 15 and under. 4, I will work extensively to increase the number of residents who are uninsured or have no access to medical care. I support a Medicare for All that includes dental and vision, with no limits on who you can visit or what service you may need.

How would you characterize the federal government’s — both the Trump administration and the Biden administration, as well as Congress — response to the pandemic?

Do believe that everyone has fair and equitable access to the right to vote? Explain.

Quintanilla: Absolute, no need to explain it is the most fundamental right that every Citizen should have without restrictions and or obstacles.

How are you different from your opponent (or opponents) in this race?

Quintanilla: He is a Fracking, oil and gas Congressman that voted against the Clean Water Bill and in favor of the Keystone Pipeline. He has shown through his voting record that he does not believe in protecting our environment and keeping our water supplies safe from toxic contamination. I support Consumer Protections, our Congress voted to eliminate Consumer Protects in Dodd Frank. He voted to eliminate restrictions o Payloan Companies, restrictions that would protect the very poor who cannot otherwise have access to traditional and affordable funding alternatives. I oppose the Anti-Israel Boycott Ban that violates free speech and favors one country over another. I support Syrian Refugees without restrictions, my opponent supported the Syrian Refugee Ban. I support sanctions and a call to end the interrogation of teenagers in Palestine with access to lawyers and due process, my opponent supports the abusive and international condemn practice be conducted by the Israeli Military. I support restriction on contributions from corporate entities and special interest my opponent is a money grabbing Congressman that has raised over 9 million dollars from oil, gas and special interest. Recently the FBI raided the home of Henry Cuellar for contributions obtain from quiet money oil and gas sources, Marc Veasey has received money from many of these same contributors. I support Black Lives Matter and the Right to protest and have been actively co leading marches against abusive practices by police, Marc Veasey has been nowhere to be seen, He was nowhere to be seen when the Tornadoes hit North Dallas and he was Nowhere to be seen when the Atmos Gas Explosions occurred, I was active and engaged.

Name one part of your platform that, if it was a bill, you feel would or should get bipartisan support.

Quintanilla: Comprehensive Immigration Reform with a path to Citizenship.

Bethany Erickson, Digital Editor at People Newspapers, cut her teeth on community journalism, starting in Arkansas. Recently, she's taken home a few awards for her writing, including first place for her tornado coverage from the National Newspapers Association's 2020 Better Newspaper Contest, a Gold award for Best Series at the 2018 National Association of Real Estate Editors journalism awards, a 2018 Hugh Aynesworth Award for Editorial Opinion from the Dallas Press Club, and a 2019 award from NAREE for a piece linking Medicaid expansion with housing insecurity. She is a member of the Education Writers Association, the Society of Professional Journalists, the National Association of Real Estate Editors, the News Leaders Association, the News Product Alliance, and the Online News Association. She doesn't like lima beans, black licorice or the word synergy. You can reach her at [email protected]lenewspapers.com. 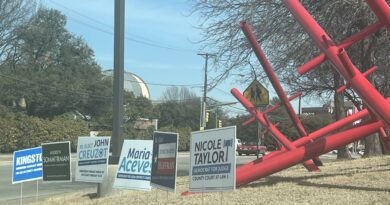 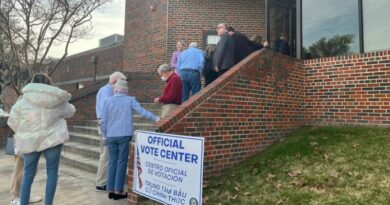