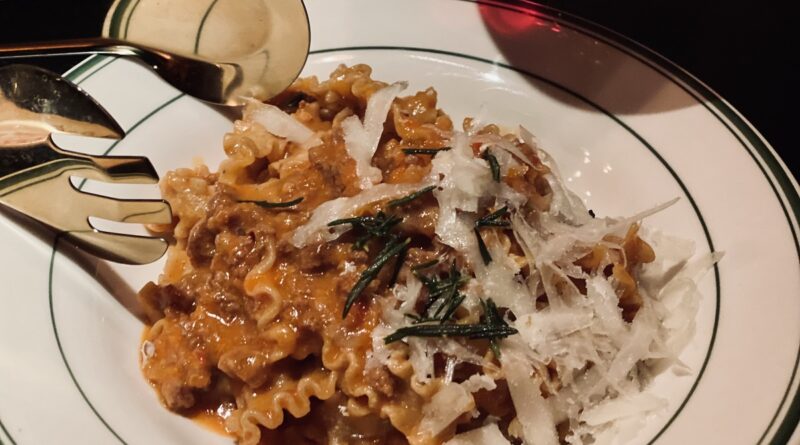 The much-anticipated sister restaurant to The Charles has made her debut and it’s as fabulous as you’d expect it to be.

Sister, an Italian-ish trattoria on Greenville Avenue inhabits the space of The Grape, a fabled Dallas dining institution that opened in 1972 and closed in 2019.

Those familiar with the space will recognize it from its former days, but barely. The space has been completely opened up, lighter and brighter with wallpapered trellises of pink roses climbing the walls and two sculptural but rather authentic-looking trees columned among curved banquettes in the main dining room.  The interior is feminine but not girly, anchored by built-in shelves with artfully placed slightly kitsch on one side, and a spacious pale rose marble in-line bar on the other. Designed by Sees Design, it’s well done in Grandmillennial style.

Chef J Chastain is the culinary director overseeing day-to-day operations at Sister and her brother, The Charles. Chef Matt Gold, formerly of Georgie by Curtis Stone runs the kitchen at Sister, and he and his team overflow with talent.

“Sister isn’t The Charles 2.0,” Chas said.  It stands on its own with thoughtful selections of menu items in five segments: smaller, vegetables, pastas, larger, and desserts.

Whereas The Charles is a destination with limited neighboring businesses or housing, Sister is in a neighborhood, an area already dense with energy and diners.

The menu has a touch of Mediterranean influence, with ingredients such as labneh, tahini, feta, dates, and tabbouleh making guest appearances on dishes. The wine is robust for an 80-ish seat restaurant, and the prices are practical.  The list features primarily Italian wines with a few French, American, and even a singular Greek red wine thrown in for the ish-ness of the Mediterranean vibe.

Every dish was perfect. Flavor combinations and execution were flawless. Though we only tried a few items, I’m confident every menu item is equally spectacular.

A smaller plate must-have item is the Lobster and Burrata with tomato and Calabrian chile sauce served with dainty potato chips dusted with Nori, dried seaweed. The dish is visually stunning with warm red chunks of lobster, red and yellow tomatoes that are propped up in the pale orange sauce, earthy gold chips and cool green whole basil leaves form a crown around the creamy white burrata drizzled with sunshiny olive oil.  The dish is served in a speckled blue and white bowl which makes the whole thing look like an Impressionist painting. It was otherworldly.

Two of the five pastas we tried were exceptional. The Wild “Boaranaise” pasta is so much more than pasta Bolognese.  The ribbons of Malfadine pasta, elevated with rye are like magnets, attracting the creamy sauce while firm enough to hold on to the ground cinghiale when you draw it from the serving bowl. The rye gives the pasta a slight chewy earthiness that compliments the tender, meaty sauce.  Small strips of sheep’s milk cheese give a little tang to this dish.

Calabrian chiles aren’t particularly spicy, but the heat is still tamed by the broccolini and ricotta that fills the half-dollar-sized flower-shaped Calabrian Chile Raviolis. Sprinkled with ricotta and flakes of chile, the dish is like a big, orange sun against the blue-sky bowl it arrives in.  The Duro team has thought through every detail of this restaurant.

Protein offerings include lamb, fish, pork, and a Prime ribeye, all appealing. Our choice was the Chicken Marsala that is prepared and served with four generous bone-on poussin legs rather than slabs of breast meat often seen in other preparations.  The mushroom marsala sauce is studded with slices of black truffles and served alongside the chicken, so the skin remains crispy. The bird is so tender and juicy, it could stand on its own without the sauce, but then . . why would you deny yourself?

After all of that, you might think you want to skip dessert. Don’t. There are three options, and, like the rest of the menu, they offer interesting flavor combinations.  The Double Chocolate Bar includes cherry, Mezcal, and smoked ice cream and another offers a Campari-poached pear.

What does all this fancy food and drink in a beautiful setting cost? I was pleasantly surprised at the pricing, it’s reasonable compared to other restaurants in Sister’s peer group, and well worth it.  Smaller plates range from $13 to $21, that one being the lobster, which is a generous serving and easily shareable. Vegetables are also shareable and range from $10 to $14.  Pastas hover in the teens and low 20s, the priciest protein, by far, is the Prime Ribeye at $65 which is quite fair for the quality.

Sister is unlike any restaurant I’ve been to in Dallas. It’s sophisticated but quaint, glamourous but approachable. The food is phenomenal, yes, but the décor is just as much a part of what makes Sister so ineffably good.

Well, done, Duro Hospitality.  Please save me a seat because Sister girl is going to be the belle of the ball for a long time. Cheers! www.sempresister.com

All photos by Kersten Rettig 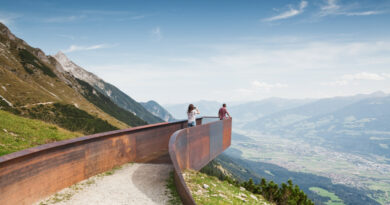 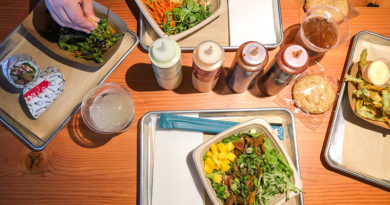 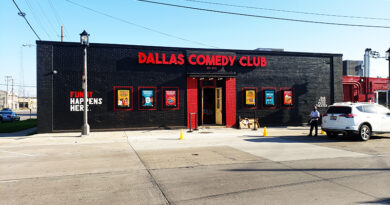